Semantics is the study of meaning. Therefore, semantic data must be constructed out of meaningful entities.

Since words only receive their meaning by their observer (reader), sadly, they do not qualify as semantic entities.

Therefore, a true semantic representation cannot include any words. Only nodes and connections.

On a true semantic network, representations of the former example, of two people who are friends, should be coded more like so: 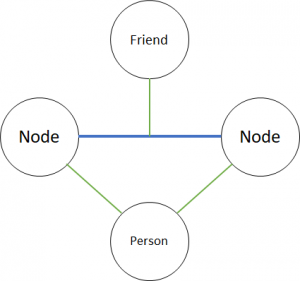 Of curse, this is just a little representation of a tiny semantic section, but for the sake of the example, let’s try to keep complexity at the necessary minimum.

Since we can’t describe things in ways that are meaningless to the network, like words, to describe a simple friendship between two people we would first need to create entire trees of interconnected nodes to represent what a person is and what being a friend means.

This extensive complexity is one of the reasons people tend to avoid using real human-like semantic networks. However, if you’re willing to put in the extra effort, it will pay off handsomely.